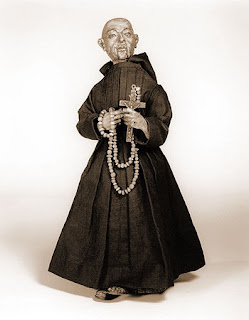 Pure Genius or Nightmare Fuel?
Maybe a little of both.
In 1562, Don Carlos, the Crown Prince of Spain, was grievously injured from a fall, and it threw the monarchy and indeed, to some extent, the world into chaos.
His father, King Philip II, was desperate to save his heir and authorized all manner of treatments. None worked, however, and it looked like the Prince would die. 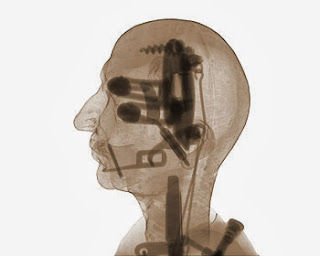 As a final attempt to save his son, King Philip prayed to God for a miracle — and promised God a miracle of his own in return should the boy survive.
The prince ends up surviving the ordeal with lore speaking of a local monk’s remains being responsible for healing the boy.

Convinced the monks remains saved his son (Yes… I know… but stay with me here) King Philip hired a renowned clockmaker to construct the diminutive yet entrancing mechanical monk in the image of the one believed to have healed the Prince.

No one knows for sure why he chose this as his way to offer payback, but many interesting theories abound among experts.

So – here’s one of the worlds oldest functioning automatons in all its nightmarish glory …
And this video shows more of the inner workings (and genius) of its design.
Reference:   http://www.blackbird.vcu.edu/v1n1/nonfiction/king_e/prayer_introduction.htm
Back To…

Inside the Space Shuttle – Rare Photos