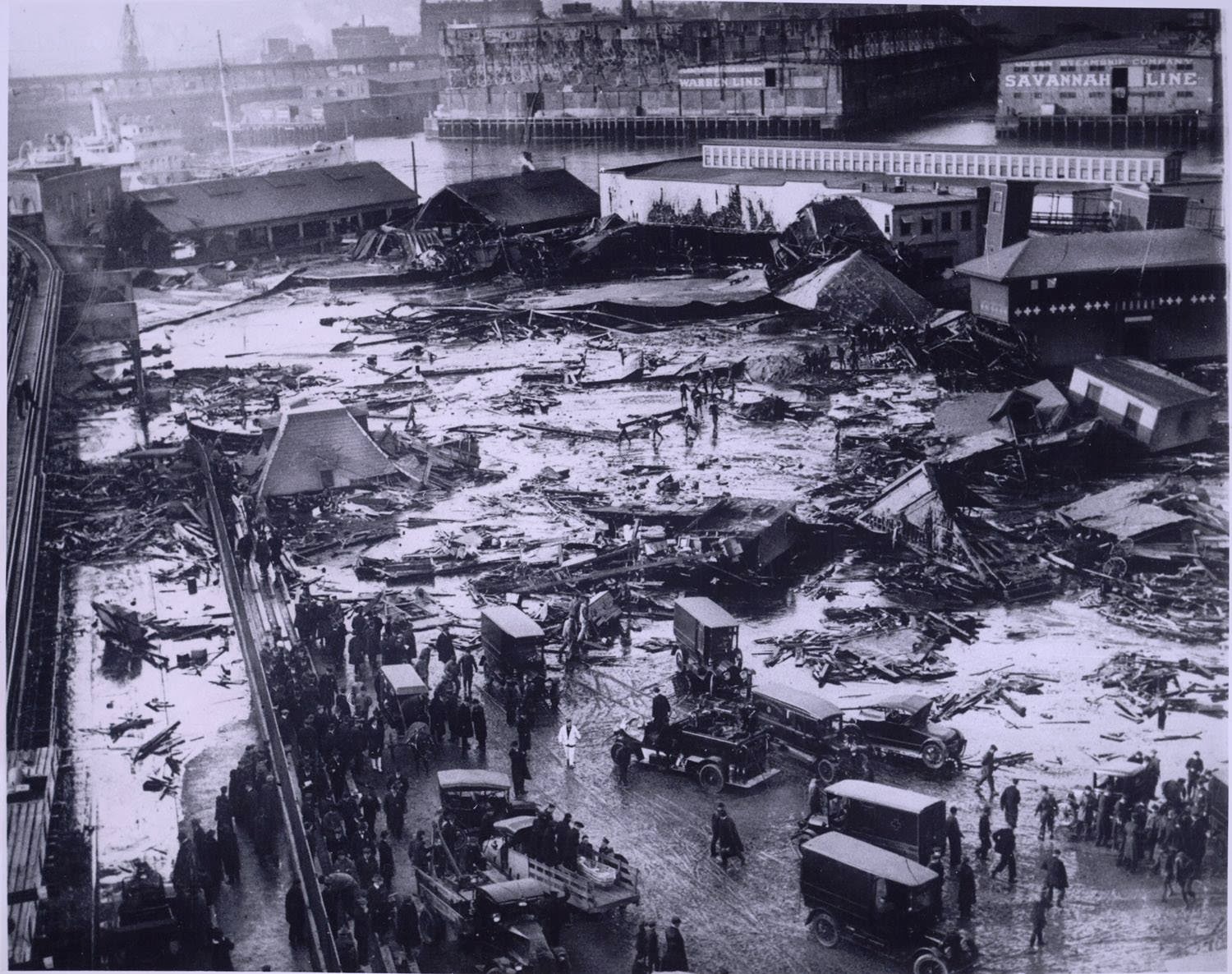 Yes.. this happened. And at the time it wasn’t a laughing matter. The disaster killed 21 and injured another 150–mostly as a result of the massive molasses wave that surged through the north-end of the city of Boston.

“On January 15, 1919—an unusually warm winter day in Boston—patrolman Frank McManus picked up a call box on Commercial Street, contacted his precinct station and began his daily report. Moments later he heard a sound like machine guns and an awful grating. He turned to see a five-story-high metal tank split open, releasing a massive wall of dark amber fluid.”

“Temporarily stunned, McManus turned back to the call box. “Send all available rescue vehicles and personnel immediately,” he yelled, “there’s a wave of molasses coming down Commercial Street!””
– Ferris Jabr
“All that thick syrup ripped apart the cylindrical tank that once held it, throwing slivers of steel and large rivets in all directions. The deluge crushed freight cars, tore Engine 31 firehouse from its foundation and, when it reached an elevated railway on Atlantic Avenue, nearly lifted a train right off the tracks.”
“A chest-deep river of molasses stretched from the base of the tank about 90 meters into the streets. From there, it thinned out into a coating one half to one meter deep. People, horses and dogs caught in the mess struggled to escape, only sinking further.”
“In the end, the disaster killed 21 people and injured another 150. About half the victims were crushed by the wave or by debris or drowned in the molasses the day of the incident. The other half died from injuries and infections in the following weeks.”
“A long ensuing legal battle revealed several possible reasons for the flood. The storage tank had been filled to near capacity on July 13 and the molasses had likely fermented, producing carbon dioxide that raised the pressure inside the cylinder.”
“The courts also faulted the United States Industrial Alcohol Co., which owned the tank, for ignoring numerous signs of the structure’s instability over the years, such as frequent leaks”
Some people claimed to still be able to smell molasses in the vicinity in the 1970’s!
Here’s the rest of Ferris Jabr’s article that explains what happened in much deeper detail.
The Science of the Great Molasses Flood
Tweet
Tagged: boston syrup flood molasses tsunami The Great Molasses Flood of 1919 the molasses disaster Uncategorized

Welcome To The Worthless Web -(Tig)

Some of the Worst Board Games Ever