Around the time I was fifteen this strange thing started to happen to me.

I would come home from school and fall asleep watching television. That’s not the weird thing. The weird thing was… I would get “stuck”.
Let me explain

I would wake up, but my body would still be in sleep mode. I would literally be paralyzed. Stuck in my own head. I couldn’t open my eyes, talk, or move a single part of my body.

Even better, it would cause the false feeling of someone or something standing very near to you, watching me. I would fight to get my body to wake up, but it was a struggle to even get my eyes opened.
It’s a strange feeling and drove me nuts for a long time. Then I started to figure out why it happened. Aliens.

Yes… it was aliens.

Seriously though….
I realized it would most often happen during afternoon naps, when the TV volume was up a bit too loud. The sounds would sneak into my dreams, causing me to wake up. Or at least wake up mentally. The body… not so much.
Then one day, while on the interwebs, I discovered the answer!
Known in scientific circles as “Sleep Paralysis”, there are documented cases going back to ancient times. Called by such ‘Scientific Names’ as:
“The Old Hag”
“The Witch Riding Your Back”
“Bound or Fastened in Metal,”

Or my favorite: “Crushing Demon”. Creeeeeepy. 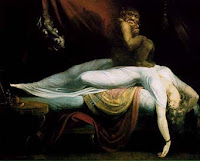 Basically, when you fall asleep, your brain has to shut down your body to stop itself from acting out during dreams. Smart idea. You can’t be acting out your dreams while sleeping. It would cause a lot of problems. 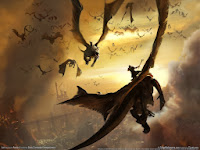 For Instance: When I’m running from a pack of dragons with a treasure chest on my back (Lord knows we’ve all had that dream. Right. Right?) probably good that I’m not acting that out in bed. Might get a few bruises as I leap off a cliffs edge onto my waiting pirate ship far below.

Sleep Paralysis is when the BRAIN forgets to wake up the BODY. So, as I would snap out of a dream, my brain would remain in sleep mode.

Eventually I learned the trick to snapping out of it – It boiled it down to two things:

1. Do my best to move. Wiggle. Call out. Shake my head. All are difficult to do. But eventually it would get my brain to play along.

2. Just go back to sleep.  (Though this is difficult since I can’t roll over or move.)

It doesn’t happen much anymore. Maybe once or twice a year. When it does, I just let it go. It’s interesting to see where my brain will take me. Some claim those who get Sleep Paralysis have a better chance of experience Lucid Dreams. So I got that going for me!

That is – unless a fly lands on me. Then it totally sucks.