POLYBIUS
The Arcade Game You Can’t Remember Playing… For A Reason.
(insert maniacal laugh here)
This story starts all the way back in ancient times… 1981. Back then, pimple faced teenagers would congregate in great halls known as arcades. 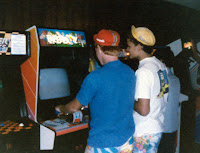 Kids would spend hours after school (and sometimes during school) pumping quarters into bulky, brightly-decorated wooden boxes. This was the future of gaming my friend. Games like Ms. Pac Man, Qbert, and Paperboy ruled the lands.
But…
One game had a stranger, more sinister past. 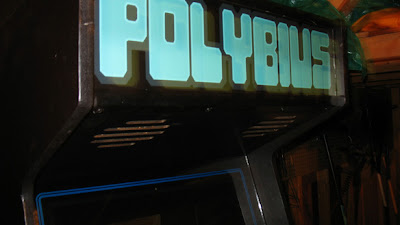 THE STORY GOES:
There once was an obscure arcade game called Polybius. The game was released in 1981 and could only be found in one or two backwater arcades in a suburb of Portland Oregon.
The history of the game is cloudy at best. But soon after it was released, strange stories of kids getting amnesia after playing the game began to surface.
coinop.org explains further:

“The bizarre rumors about this game are that it was supposedly developed by some kind of weird military tech offshoot group, used some kind of proprietary behavior modification algorithms developed for the CIA or something, kids who played it woke up at night screaming, having horrible nightmares.”
“According to an operator who ran an arcade with one of these games, guys in black coats would come to collect ‘records’ from the machines. They’re not interested in quarters or anything, they just collected information about how the game was played.”

As for the Game-play: 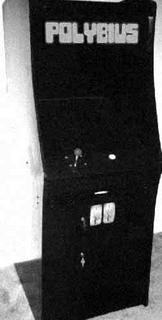 “The game was weird looking, kind of abstract, fast action with some puzzle elements, the kids who played it stopped playing games entirely, one of them became a big anti video game crusader or something. We’ve contacted one person who met him, and he claims the machines disappeared after a month or so and no one ever heard about them again.”
Black and White photo provided by:  http://www.arcade-museum.com/
Only one original cabinet was ever found – but of course the game itself was removed from the inside.

Joshua_Kopstein of  Mother Board explains the effects the game supposedly had on people. 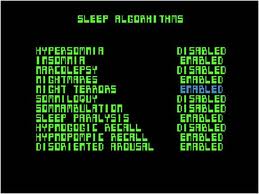 “The few gamers who got to play it supposedly became addicted, exhibiting strange behaviors and conditions as a result of playing. Some say they experienced an extreme form of vertigo and vivid hallucinations long after they had finished playing while others claim they suffered amnesia, in some cases forgetting their own name. And most horrifying of all, it’s said that some players were haunted by horrific nightmares and eventually driven to insanity and suicide after coming under the game’s influence.”
The game itself was said to have been a 3-D, vector-based shooting game, similar to Atari’s arcade hit ‘Tempest’ – but nobody really knows.

No version of the game has ever turned up.

Even stranger – the company listed as the creator is called “Sinneslöschen” – which roughly translates into “sensory-extinguishing”, or “removing senses”. 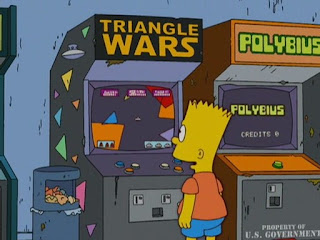 The game even made a quick appearance on the Simpsons.
The idea of a mind-control arcade game is intriguing, and though it seems a bit silly to think the government created a game to control the minds of nerdy teenagers… a part of me wants to believe it was true. 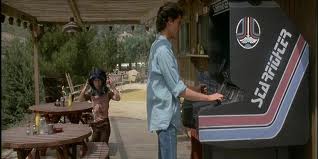 Track Every Flight In Real Time

4 thoughts on “Polybius – The Arcade Game of DEATH -(Tig)”