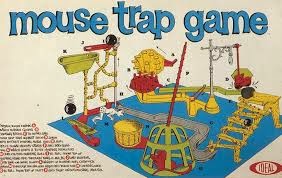 Quick question… does anyone have any true memories of playing Mouse Trap?I mean the actual game?

I don’t. All I remember is ripping  open the box and immediately attempted to put together the Rube Goldberg contraption. 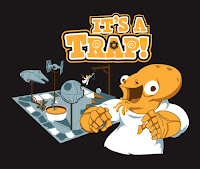 Only recently did I realize how the game is truly played. You build the contraption as you go! Yeah – seriously.  That’s the game. Go figure. Am I in the minority here?

One time I saw some kids playing mousetrap but the contraption was only half built. I scooted one of the little ones over and asked them what they were doing? They said playing Mousetrap. I told them they were clearly playing wrong then proceeded to build the rest of the contraption for them. 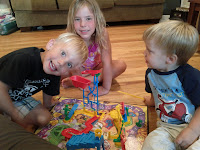 I even made sure to position the swimmer backwards
on the see-saw. Then, when everything was teetering
in place , I cranked that puppy up.
It worked perfectly.
The boot.The zig zag table.
Even the tub ball drop.
It was one of the best runs I had ever seen. But, when it finished, the kids started to cry. At first I guessed them to be tears of joy – moved by the beauty of such a flawless run. But I came to find that these kids had been playing religiously for 2 months . The PROPER way! Never once building the trap and running it outside of the game rules.
Nope – these kids were pros. They just kept playing the game – faithfully waiting for the one day when they would witness the machine in all it’s glory.
Then – they met me…
Tweet
Tagged: 1677 absolute drivel mouse trap mouse trap rules nerd out with me nerd out with me blog ramblings of a nerd rube goldberg Uncategorized unique board games