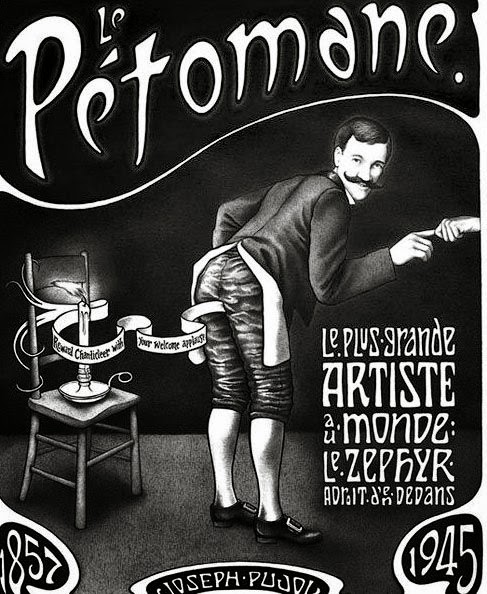 I was always intrigued by once famous people who somehow became lost to history.

People who were huge in their time, then for some reason… disappeared from the limelight, never to be talked about again.
Joseph Pujol is one of those people.

Known as Le Petomane (the Fartist), Joseph was so popular that he  performed for Edward Prince of Wales, King Leopold II and even Sigmund Freud.

His talent… if you haven’t figured it out yet…
Farting.
At a young age, Joseph discovered – on accident while swimming with friends – that he could suck water up into his rear end.

“He put his head under the water and held his breath, whereupon he felt an icy cold penetrating his rear. He ran ashore in fright and was amazed to sense water pouring from his anus.”
Yeah… that’s how it all started.
After a doctor told him he would be okay, Joseph decided to keep it to himself… until he joined the army. There, he would suck water out of a pan with his ass, then fire it several yards into the air to amuse his army friends. That was when Joseph discovered his true talent, he could also suck air into his ass as well!
After the Army, Joseph spent his days as a baker, entertaining his customers by playing music from his buttocks as he baked. I wish I was joking.
He eventually took his show on the road. Joseph impressed so many people with his ability to sing, make animal noises, and amazing ass water shows, he was asked to perform at the famous Moulin Rouge.  Joseph became the highest paid entertainer in France, and most likely the entire world.
He also played an Ocarina through a rubber hose that he jammed into his butt – beat that Link!

Joseph went on to perform for years, entertaining the world with his God given talent. A few books and even a movie was made about his life over the years, but something tells me nothing could duplicate the live shows.

Here is a bit of footage… unfortunately there is no sound.  BUT… the second video is an actual recording of the man… and his…uhh…. talent.
Enjoy…with a meal.
References:
http://en.wikipedia.org/wiki/Le_P%C3%A9tomane
http://www.straightdope.com/columns/read/363/did-a-french-vaudeville-star-once-specialize-in-trained-flatulence