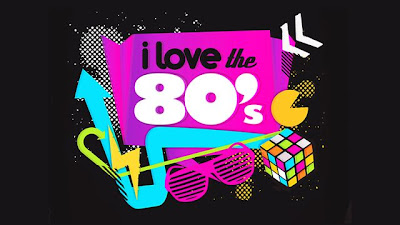 hands down the most awesome decade to be a kid
in the history of humankind.*
*According to me

We were children on the front lines of the technological explosion that now drive our entire society. Video games – personal computers – the internet – cell phones – MTV – CNN – hell, cable television in general – to name a few. And Trivia Pursuit! Can’t forget that. Sure, not all of those things were INVENTED in the 1980’s, but they most surely were driven to the fore front during it.  And I – a child of the 80’s – got to be there from the beginning.

One thing we may have done a bit too much of was watch television.
I watched a lot as a kid. Yes, we all played outside everyday. Yes, we even played when it rained and until the street lights came on. Sometimes even waiting for mom to yell out the back door three more times, because that hole we were digging to China was reeeeeal close.
Some say (some  =  Mom – and it was always just in time to interrupt every good line of Fraggle Rock. Look Mom, sometimes Boober says something inspirational! Not like that ridiculous babble on USA Cartoon Express.)

The Dastardly’s never win the Laugh Olympics…
I get it.
So, watching too much television, it was said, gave you a short attention span.
But, I don’t buy it. I remember everything from childhood. Like how the Tootsie Roll owl had the same voice as Gargamel. How to get those “mature” channels by pressing two buttons at once on the cable box. Oh, and what exactly was up with David Bowies cod piece in Labyrinth? 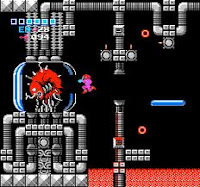 I once stayed home sick from school just so I could beat Metroid. And you know what… it was worth it.

Real quick – Was I the only Scratch & Sniff snob? There was this certain brand that EVERYONE had. Then some knock off Scratch & Stiff would try to jump on the market. They would convince your great Aunt Irma to buy them for you at the dollar store.
“Yeah old lady, all the kids have them. Your nephew will love em. Yep, only a quarter.”
I threw em right the heck out.

I just chucked em, un-opened, right in the garbage. They weren’t anywhere near good enough to grace the pages of my Garfield Scratch & Sniff sticker book!
I wouldn’t even stick them in my back up Hong Kong Fooey sticker album.
Now, before you get your panties in a bunch and say something stupid like, “Dude, you just should have tossed them into your Gremlins lunchbox you used for all the doubles.”
To that I say – You know better.
Those things never held up to the repeated rubbing that was going on. I’m talking
fingernails here!
Scratch-sniff-scratch-sniff-scratch-sniff.
I’m told they were a gateway drug. My friend got hooked on Yankees Candles later in life.
I would have never known what a snowman smelt like without a Scratch & Sniff… Just saying.
Let me speed ahead to my point. So there were always these specific characters from 80’s shows or movies that freaked me out. Sloth never really bothered me. Not even the clown from IT.

Let me explain. Maybe some of you will agree with me.
First Up, the one and only, John Amos.
(Yes I know, Mr. Amos is an actual person. – Just roll with it.)

This, is John Amos. Mr Amos has been scaring the living crap out of suburban white kids for some 40 years. He’s been scaring me since I set my eyes on the Television show “Good Times.”

I watched “Good Times” every day. And other then Different Strokes, Gilligan’s Island, and maybe Threes Company, this show was a staple of my TV diet. My 7 year old brain couldn’t get enough of J.J. 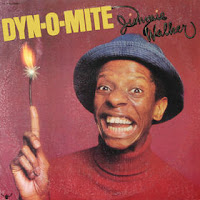 I feel I need to bring you back to my point. That J.J. pic kind of wipes the fear from my lizard brain. 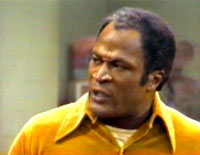 Actually, this pic is perfect. This is how I remember “James”. In fact, I’m sure this exact image is permanently burned into my cornea. He scared me every moment he stepped on camera. I would watch on pins and needles, waiting for him to snap on J.J. or come inches from tearing the throat out of some racist bank loan officer or punk on the street that tried some funny business with Thelma.
He was always so ticked off !
And of course J.J was always pushing his buttons. I would yell at the Tv “Stop J.J,  he’s gonna eat you!”
So now you say, “Hey stupid ass, you mean James from “Good Times”, not John Amos, the actor.”

I’m getting to it…

You see, he scared me in everything he did. 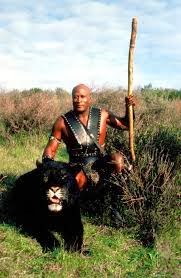 When John played Seth in “Beast Master” he was suppose to be a wandering wise man. But somehow he still came off as intimidating. He could have kicked the Beast Master’s, and everyone else in the film, butt at any time.
Even in “Coming To America” – dressed as a fast food manager. 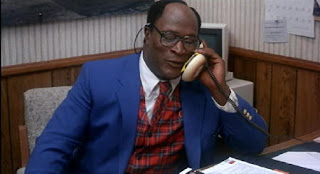 He’s the only man on the planet that could make me pee my pants while talking on a hamburger phone. 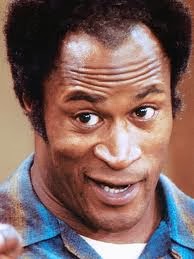 John Amos – you will always hold a place in my heart, whether I like it or not.

Next Up:  Anne Ramsey 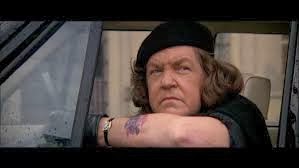 I’m starting to realize it was more the person playing the character that scared me. But let’s keep moving.

I know I’m not the only one who feared Mama Fratelli. This “woman” summed up how she felt about kids in Goonies.

“Kid’s suck…”
Look – the woman gave birth to a monster, dropped him twice as a baby, locked him in a cellar, and ended up spending Sloth’s dentist money on Francis’s toupee.  That’s hard core.
Then there was “Throw Momma From The Train”

Even as a homeless woman in “Scrooged” she scared me!
(okay maybe not so much – but she sure as hell didn’t melt my heart.) 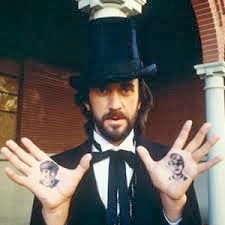 The Villian from “Something Wicked This Way Comes”

Yikes… this guys was scary as all heck. The movie itself was creepy enough, but Mr. Dark was the ring leader. 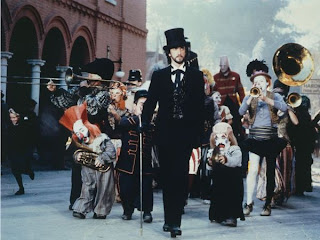 He was infamous for granting you your wish, then twisting it in a terrifying way so you would be worse off in the end. Oh, you want to be young and beautiful again… sure… but you’ll be blind. Regret was his specialty. And he seemed real interested in little kids.

Do yourself a favor, if you never seen this film, watch it. It still makes me shudder.

Next:  The Dying Emperor Skeksis from The Dark Crystal. 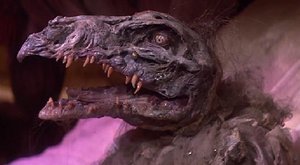 Yes – every Skeksis is hideous in some way. But.. this one really freaked me the frakk out. It’s blood curdling screeches. It’s strange obsession with remaining Emperor until it dies. then… then… this…

Kill it! Kill it with Fire Now!! 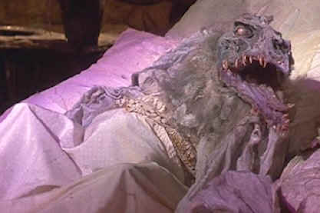 I fast forward past this part every time it comes up.
As a kid I was convinced this thing would bite off my fingers as I slept.

Chamberlain and Aughra were beauty queens next to this thing.

Next Up:    Sensei Kreese 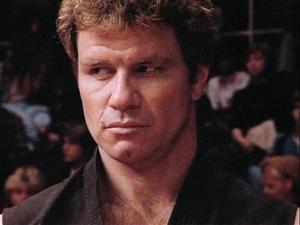 Yeah.. this guy.
What a complete butthole this guy was. Kreese was the only person who dared to threaten Mr Miyagi. (Well, at least in America. The poop really hit the fan in Okinawa)
This guy reeked of pure evil.
I truly hated him with all my soul.
As a kid you were always told to tell an adult if you’re being bullied.
Well guess what… this dude was the ring leader of the bully brigade.
You lose Danielson. 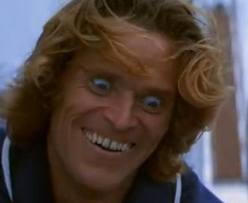 Welcome To The Worthless Web -(Tig)

Feed Your Head – “The Speed Of Dark”

One thought on “Fraggles, Scratch & Sniffs…”