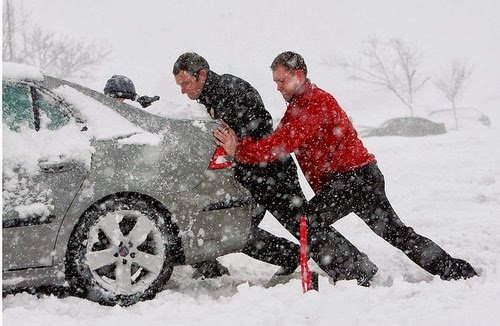 Did you ever have to push something big? Maybe with a couple friends? Like a car down a road? Ever fake push?

Yeah – You know what I’m talking about. Fake pushing. We’ve all done it. We strain and get all red faced. Yeah, look at you… fake pushing harder than those other guys are real pushing.
Yeah, sell it – sell it good.
Sure, the thing you’re pushing doesn’t actually need six guys to move, but odds are you’re spending more energy faking it than if you just pushed the damn thing!

One time I got caught fake pushing by my Grandfather… and he called me out on it. We had to push his old Winnebago up a slight hill. It was heavy, so once we started, we couldn’t stop. But, that didn’t stop me from faking it.
I was hemmin and hawinn – really giving a good show. But, then he caught me.
For a split second I stopped.

I think I had an itch or something. Either way, I let go, and he saw me. He yelled, “Come on, stop faking and push damn it.” I can understand why he was angry, so I put my back into it and half pushed that old rust box to the top.

Now before you start judging, let’s be honest… there are all types of pushers, each one as guilty as the rest. Let’s reflect shall we…..

The Show Off Pusher:

This guy does all the pushing, whether you like it or not. To the outside observer, he’s simply doing his best. But it’s all a lie. He pushes for one sole reason, a message that has played in his head non-stop since he was born….
“WIN!  WIN!  WIN!  WIN! WIN!”
Fake Pushers are almost always found lingering around Show Off Pushers. 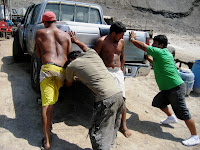 These are the ones that can never seem to find a comfortable position on the thing being pushed. They spend the entire time switching and moving their hands around, always looking for the perfect position to make the maximum push.
But, by the time they finally do – The Show Off Pusher has already finished.
Fake Pushers stay as far away from Uncomfortable Pushers as possible. They’re too risky.

This fella always miss-times the push… hence the name.
“Wait , did you say on 3  -or-  1 -2 -3 – push?  I’m confused. Guys? Guys?”
These guys always screw it up. They push too late, they push too early, making them completely ineffective. And more often than not, they’re the ones that injure themselves before any actual real pushing takes place.
“OK – 1 -2 – 3- Oh wait. I thought you said on 3. Wait wait. Ouch, my back!”
The Missed Time Pusher also rarely, if ever, contribute to the push, leaving it once again to The Show Off Pusher.
So remember, always thank The Show Off for doing all the work, because without them, nothing would ever get done.
Tweet
Tagged: absolute drivel fake push nerd out with me nerd out with me blog no help pushing ramblings of a nerd show off Uncategorized winnebago

2 thoughts on “Fake Pushing-When Will The Madness End -(Tig)”