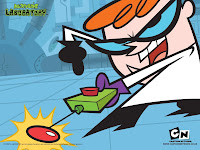 A long lost episode of “Dexter’s Laboratory,” titled “Dexter’s Rude Removal,” is finally seeing the light of day.
About 10 years after the series ended its run on Cartoon Network, Adult Swim has posted the full episode.

“Dexter’s Laboratory” creator Genndy Tartakovsky commented on the episode, which had become sort of a myth.

“There was an episode like that called ‘Rude Removal,’ but it was for kids, about Dexter trying to remove the rudeness from Dee Dee,” Tartakovsky said when asked about a rumored adult-oriented “Dexter” episode. “But he ended up making a rude version of himself and Dee Dee. They cursed but it was bleeped! Cartoon Network didn’t want to air it, they thought it was too harsh.”
Well, here it is in all its bleeping glory.
Tweet
Tagged: dee dee dexter dexters lab get out of my laboratory nerd out with me rude removal tales of interest Uncategorized votd